Wedlock – Some Thoughts about Jesus, Jessie and my Grandson

The state of being married.

We don’t use the word “Wedlock” very much anymore, it’s “old” English now. If we’ve used that word in our vocabulary, it probably came with two other words always in front of it: Out of. 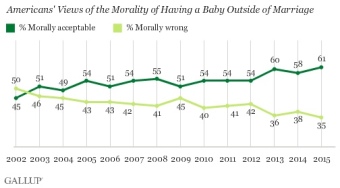 of wedlock” used to be a brand of shame in our culture…a child born outside of the boundary of matrimony. But it is hardly even noticed in our “new” English conversation. In fact, according to a recent study, 40% of all children born today are born “out of wedlock.” Another study indicates that 61% believe having a child outside of marriage is morally acceptable and only 35% believe it is morally unacceptable.

On September 21st, 2019, my newest grandson was born here in Lancaster Country, PA. He was born out of wedlock. Does that matter? Yes. I am a second-generation conservative evangelical preacher. My Dad was “saved” at a Billy Graham crusade in Philly the year before I was born. He left a brand new home and a good job to be trained as a pastor when I was one-year-old. I grew up in a home that honored the Bible and cared about people’s eternal destiny.

I answered a “call” to ministry as an 18-year-old college student. I started preaching in a little church when I was 20 while finishing college and seminary. I have served Jesus in Kingdom building ministry for the last 37 years. Our ministry continues to honor the Bible and care about people’s eternal destiny. One of our greatest joys is that our four children, who have withstood the difficulty of growing up in a pastor’s family, love Jesus. My wife, Tania, and I love watching them follow Jesus and grow in their faith.

A couple years after Jessie, our first daughter, was born, I wrote this song for her:

With two brothers before you,
What a joy to behold
A baby wrapped up in pink
With her hair in a bow.
In the image of your mommy
A little lady is here
And with each passing day,
These are the things we hold dear:

You can smile with your eyes 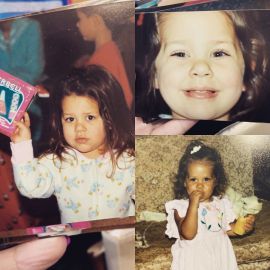 Change my mind with one touch
Sing a song about beauty
Squeeze my neck with a hug
You’re so sweet, you’re so tender
Send my heart for a whirl
You’re my princess, my Jessie…
You are daddy’s little girl.

Well the years pass so quickly
Won’t be long ‘fore you’re grown
One day we’ll hear wedding bells
And then a home of your own.
So we’ll treasure these moments
Thank Jesus every day

For our precious little girl
And memories time can’t steal away.

We prayed for the spouses of our kids and hoped for the Biblical order…you know…first comes love, then comes marriage…you know the rest.

Based on all that we believe, Jessie took the wrong road. But I can’t wait to tell you what she found at the end of that road.

Jessie isn’t the first to take a wrong road. How many of us wish we could retake certain trips we have taken on a less than ideal pathway? One of my favorite stories in the Bible involves Peter and Jesus not long before Christ was crucified. Jesus is trying to prepare his disciples for the reality of His death. In Mark 14:27, Jesus looked into the eyes of His closest friends and said: “You will all fall away.”

Peter takes a good hard look at his comrades and basically concedes that they could definitely fall away. But he is “rock” solid sure that he will not. “Even if all fall away, I will not.” Peter is full of prideful presumption, he can’t even fathom falling. It is divinely ironic that he will share the limelight that very night with a rooster! By the end of the evening, after denying Christ three times, he will have lost his strut and his cockiness.

How does Jesus deal with Peter’s fall? Even before Peter shouts with curses his denial of Christ, Jesus makes a “can’t believe it’s true promise.” Mark 14:28 says, “But after I have risen, I will go ahead of you into Galilee.” 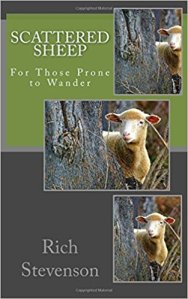 Christ was promising: “I will walk the way of suffering and be nailed to a cross and put in a tomb. But after I have risen from the dead, I will also walk to where you will be at the end of your wrong road. I will be waiting for you in Galilee after you have denied me.”

I wrote a lot more about this encounter in “Scattered Sheep – For Those Prone to Wander” (You can find this on Amazon). Let me wrap this part up here by saying that Jesus is promising Peter He will be waiting for him at the end of the wrong road.

Back to our Wedlock story…Jessie took a wrong road according to God’s Word. I can’t sugar coat that and stay true to the Word of God. But I also want you to see how Christ has revealed Himself to us through this pathway.

In January of 2019, I led a retreat for the Wesley Network staff in Ocean City, NJ. That is where both of my girls, Jessie and Corrie, lived at the time. On Friday night at about midnight, Jessie called us and asked to come over. We would find out later that she had moments before taken a pregnancy test and saw that it was positive. When she got to our house, she immediately fell on her knees. With tears streaming down her face, she said: “Dad and Mom, I am so, so sorry. I know this is wrong.” Sobbing, she told us about a relationship with a man that she had broken off a month before and that she just found out she was pregnant. She just kept saying over and over again, “I am so sorry.”

I had all kinds of thoughts running through my head. Some of them were selfish, some angry. The thoughts that won the night were from Jesus. I thanked Jessie for coming right to us. I still can’t believe that her first move after the pregnancy test was to find her parents. I reminded Jessie about her identity in Christ and that we are not defined by our darkness, but by Christ’s destiny for us.

What took place that night was almost sacramental. Tania and I were privileged to lead Jessie in a prayer of repentance. It was heartfelt and real. We were able to walk with her in receiving Christ’s forgiveness. It was immediate and full. Then…this is such a miracle…we were able to pray prayer’s of blessing over this precious child. This all took place within the first hours of finding out she was pregnant.

Jesus kept showing up on this road. Several months later, Jessie was in the hospital with bleeding. Tania and I know firsthand the pain of miscarriage. We also know from pastoring that 1 in 4 pregnancies end with this result. I felt like I could see the prognosis in the faces of the doctors and nurses. I was preparing for the worst. But that little baby just kept kicking!

On Father’s Day of 2019, I got one of the best cards I’ve ever received from Jessie. She wrote about her feelings for me and that she had decided to name this baby Richard Graham. He would be my namesake, along with another pretty good preacher named Billy. I couldn’t wait to tell my Dad the news. I made a gamble with my first question on the phone call to him, but it paid off:

“Dad, who are your two favorite preachers?” I asked.

He replied, “Well, you of course. And then Billy Graham.”

We celebrated that his newest great-grandson was named after both of them. 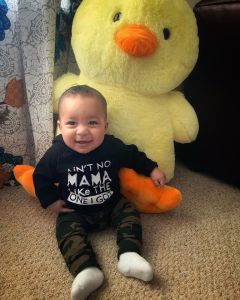 From the moment Richard Graham, we call him Graham, was born, he was been one of the purest expressions of joy our family has known. In this season, Jessie and Graham are living with us. I can’t describe to you the feeling I get when he waves his arms excitedly, crinkles his nose, and smiles a great big smile just because I’ve walked through the door.

Maybe the clearest way that I have seen Jesus on this road is through my daughter. Jessie is absolutely one of God’s favorites. She loves with a ferocity that few know. Watching her walk this path with grace and
glory has been a highlight in my life. She certainly did not dream of single-motherhood or living with us in a townhouse at this stage in her life. But she has not lost one facet of beauty in walking out her destiny in Christ Jesus. 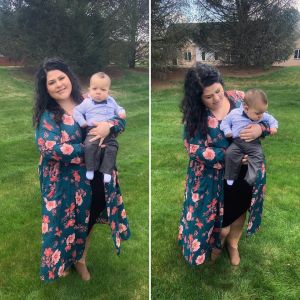 Jessie went down the wrong road. But what she found at the end of that road was forgiveness and grace. No…it was more than that. Jesus went ahead of her down that road. He was waiting for her there.

The state of being married.

I’ve got a new take on this term now. The etymology is from two words that basically mean “the act of making a pledge.” I still believe in the pledge of matrimony. But there are more pledges from God:

Children are a heritage from the Lord, the fruit of the womb is a reward. Psalm 127:4

For you created my inmost being; you knit me together in my mother’s womb. Psalm 139:13

If we confess our sins, he is faithful and just and will forgive us our sins and purify us from all unrighteousness. I John 1:9

You may be prone to wander and maybe you are on a wrong road right now. Keep your head up…look around you. Our Savior goes ahead of us. You can find him at the end of that road. He’s the one with a glimmer in His eye and grace in His hands.

Rich is the Executive Director of The Malachi Network (www.malachinetwork.org), a ministry focused on making the name of the LORD great among the nations. This network serves young leaders in missions and church planting. Prior to his present ministry, Rich pastored in Southern New Jersey, planted a church in Wilmore, KY, established a network of churches, served as an adjunct professor at Asbury College and was a senior leader at The International House of Prayer in Kansas City, MO as well as The International House of Prayer in Atlanta, GA. Rich is the author of two books: Secrets of the Spiritual Life—10 Lessons from the One Thing Passages (Baker Books, 2003) A Voice from Home—The Words You Long to Hear from Your Father (WaterBrook Press, 2005) He graduated from Asbury College in 1984 with a BA degree in Philosophy of Religion and Asbury Theological Seminary in 1987 with a Master of Divinity degree. In 2010, Rich received an honorary Doctor of Divinity degree from Union Biblical Seminary in Yangon, Myanmar. Rich has been married to Tania since 1982 and they have been blessed by amazing children: Zachary and his wife Meghan, Jacob and his wife Lena, Jessica and Corrie Emma.
View all posts by Rich Stevenson →
This entry was posted in Uncategorized and tagged AVALON BEACH CHURCH, Bible, Bible Study, Christian, church, Devotional, encouragement, evangelism, faith, forgiveness, God's love, inspiration, Jesus, malachi network, missions, out of wedlock, power, rich stevenson, salvation, spiritual, teaching, wedlock, Wesley Church, Wesley Network, worship. Bookmark the permalink.

2 Responses to Wedlock – Some Thoughts about Jesus, Jessie and my Grandson