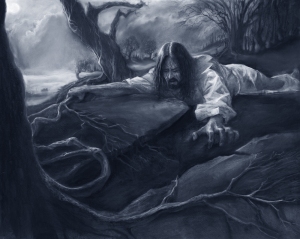 And there are times of sorrow or confusion when perspective is essential.  This post is intended to give you this power.

39 Jesus went out as usual to the Mount of Olives, and his disciples followed him. 40 On reaching the place, he said to them, “Pray that you will not fall into temptation.” 41 He withdrew about a stone’s throw beyond them, knelt down and prayed, 42 “Father, if you are willing, take this cup from me; yet not my will, but yours be done.” 43 An angel from heaven appeared to him and strengthened him. 44 And being in anguish, he prayed more earnestly, and his sweat was like drops of blood falling to the ground.

14 A day of the Lord is coming, Jerusalem, when your possessions will be plundered and divided up within your very walls.  2 I will gather all the nations to Jerusalem to fight against it; the city will be captured, the houses ransacked, and the women raped. Half of the city will go into exile, but the rest of the people will not be taken from the city. 3 Then the Lord will go out and fight against those nations, as he fights on a day of battle. 4 On that day his feet will stand on the Mount of Olives, east of Jerusalem, and the Mount of Olives will be split in two from east to west, forming a great valley, with half of the mountain moving north and half moving south.

Did you see it?

Jesus SPILT tears on the Mount of Olives.  When He returns, He will stand in the same place and SPLIT the mountain with His power.

Please remember that all that happens in this age prior to Christ’s return is really just dress rehearsal.  There is a day coming when Christ will rule on this earth with power and justice.

The ground where tears were spilt will be split as a sign of His power.

Rich is the Executive Director of The Malachi Network (www.malachinetwork.org), a ministry focused on making the name of the LORD great among the nations. This network serves young leaders in missions and church planting. Prior to his present ministry, Rich pastored in Southern New Jersey, planted a church in Wilmore, KY, established a network of churches, served as an adjunct professor at Asbury College and was a senior leader at The International House of Prayer in Kansas City, MO as well as The International House of Prayer in Atlanta, GA. Rich is the author of two books: Secrets of the Spiritual Life—10 Lessons from the One Thing Passages (Baker Books, 2003) A Voice from Home—The Words You Long to Hear from Your Father (WaterBrook Press, 2005) He graduated from Asbury College in 1984 with a BA degree in Philosophy of Religion and Asbury Theological Seminary in 1987 with a Master of Divinity degree. In 2010, Rich received an honorary Doctor of Divinity degree from Union Biblical Seminary in Yangon, Myanmar. Rich has been married to Tania since 1982 and they have been blessed by amazing children: Zachary and his wife Meghan, Jacob and his wife Lena, Jessica and Corrie Emma.
View all posts by Rich Stevenson →
This entry was posted in Uncategorized and tagged Bible, Bible Study, Christian, Devotional, encouragement, faith, inspiration, Jesus, missionary, missions, perspective, power, salvation, spiritual, suffering, teaching, worship. Bookmark the permalink.