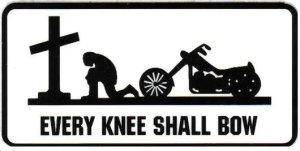 One of the all time best preaching experiences I’ve had was in a holiness campmeeting in North Carolina.  The campmeeting was well over 100 years old.  In every way but one they were typical of campmeetings that I have been in all over the country.  What set them apart was that they rented their facility all year long to a biker’s ministry.

AND THE BIKERS PARTICIPATED IN THE CAMPMEETING!

This created a wonderful contrast all week long.  I watched men in black leather with names like Moses and Striper carry the cafeteria trays for elderly women.  The choir at the evening services were half holiness folk and half former biker renegades.  The special music one night was “The Old Rugged Cross” sung by a long haired and life worn man in a leather vest and a not so appropriate tattoo on his forearm.  I could tell he really did cherish the cross!

One of the best things that week was a testimony I heard one on one from a young man they called “Biker Bill.”  He told me about being born into a mafia family in NYC.  He shared about his adolescence and rebellion.  Then he told me about the accident with a forklift.  It left one of his feet broken and crooked.  He never had it fixed, so he walked with a limp.  The other bikers would get him to show it to people to gross them out.

One night after he was welcomed into the ministry at the campmeeting, he went back to his dorm room still singing the new worship songs he was learning.  He sat in his straight wooden chair in that simple dorm room singing songs of love to Jesus.

He told me that while singing, he started hearing a strange noise.  He didn’t stop singing, but he looked around the room to try and figure out where the noise was coming from.  He focused on the floor near him and then on his crooked foot.  He raised it up in front of him while still singing. . .

The noise was coming from his foot.  He watched as the crooked foot become straight!  He was listening to the bones being moved without any pain.  The One whom he was singing love songs to was healing him.  The miracle was confirmed by many witnesses because he had grossed so many of them out beforehand.

Biker Bill encountered the healing love and power of Jesus.  You can too.  Worship Jesus today and ask Him to heal you.

Rich is the Executive Director of The Malachi Network (www.malachinetwork.org), a ministry focused on making the name of the LORD great among the nations. This network serves young leaders in missions and church planting. Prior to his present ministry, Rich pastored in Southern New Jersey, planted a church in Wilmore, KY, established a network of churches, served as an adjunct professor at Asbury College and was a senior leader at The International House of Prayer in Kansas City, MO as well as The International House of Prayer in Atlanta, GA. Rich is the author of two books: Secrets of the Spiritual Life—10 Lessons from the One Thing Passages (Baker Books, 2003) A Voice from Home—The Words You Long to Hear from Your Father (WaterBrook Press, 2005) He graduated from Asbury College in 1984 with a BA degree in Philosophy of Religion and Asbury Theological Seminary in 1987 with a Master of Divinity degree. In 2010, Rich received an honorary Doctor of Divinity degree from Union Biblical Seminary in Yangon, Myanmar. Rich has been married to Tania since 1982 and they have been blessed by amazing children: Zachary and his wife Meghan, Jacob and his wife Lena, Jessica and Corrie Emma.
View all posts by Rich Stevenson →
This entry was posted in Uncategorized and tagged Bible, Christian, Devotional, encouragement, faith, God's love, healing, inspiration, Jesus, love, power, salvation, spiritual, worship. Bookmark the permalink.